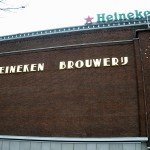 The last time we went to Amsterdam, the Heineken Experience (brewery and museum) was closed for renovations. So we were excited to find out the brewery would be open for our second trip. Visiting Heineken was my favorite part of the trip. It was a lot like World of Coke in Atlanta, except with beer.

We only got to try one kind of Heineken, but it was included in the price of admission so no complaints here. We learned that Heineken is made from water, hops, barley, and Heineken “A” yeast. 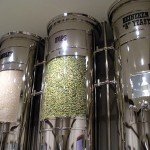 The room where they mix the mash smelled pretty bad (in my opinion), but the resulting beer is good. It’s actually better than the Heineken we get here at home. Not sure how that happens.

We learned about the Heineken family, who are well known for their humanitarian efforts. Heineken was one of the first companies to offer their employees a pension, and at one point when the economy was particularly bad, they offered early retirement in lieu of lay offs. 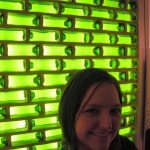 They also designed the “Wobo” bottle which could be recycled to build houses. The bottles were designed with flat sides and ends that fit together, so people could build walls out of them. Of course, the walls were made of green glass so I don’t know how well that works for a house. But then again, it could be perfect for a college frat house… 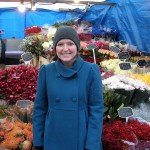 After the Heineken museum, we went to the Albert Cuyp Market. It’s basically a farmers market mixed with clothing stores. You could buy anything from fresh seafood, cheese, chocolate, or flowers to boots, purses, scarves, jeans, or formal evening dresses. The tourist websites describe it as a “general market.” No kidding. I considered it a lovely place since they sold flowers in the dead of winter. 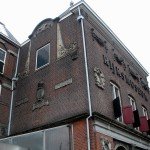 Continuing our touristy actions, we went to the Rijksmuseum. This was our second time through, and it was just as great. It’s just a really neat museum, and I recommend checking it out if you ever have the chance. They have paintings, Delftware, silver, and all sorts of random historical items. It’s a great way to learn about The Netherlands’ history and see some pretty incredible (and old!) stuff.

The Rijksmuseum is located near Museumplein (a big square that’s home to Rijksmuseum and Van Gough Museum). At the edge of this square is the ultimate in tourist attractions and photo opps – the Iamsterdam sign. If you’re taking your picture with this sign, you are 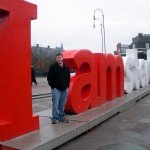 most certainly not from Amsterdam. So naturally we asked Adam to take a picture of us with the sign, and then we herded him to the sign for a picture of himself. I used my favorite Mom line of “you’ll be happy later that I begged you to do this.” 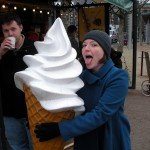 Adam had to put up with additional Roger and Rachel antics at Museumplein too. But after all, would you have handled this any differently? I’m looking at you, Kevin. I mean, the ice cream was just asking me to be silly. And so I obliged. Because I’m sweet. And I was too cold to think straight or consider my actions.

To balance out our time spent in a cultural institution, we hung out in the Red Light District. Here we experienced a few oddities – swans hanging out in a canal (yes, you read that right – SWANS, as in the huge white birds), the granny window section (what the?), a Chinese New Year parade complete with enough firecrackers I thought we were under gunfire, and a new understanding of the dangers of weed. 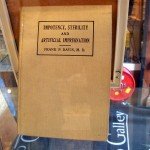 Wouldn’t the first two problems listed on this book ensure the third problem would not happen? That was at the Hemp Museum Gallery, which was actually really cool. Aside from the weed references, they also had images of how hemp was used in shipping and other areas of industry all over the world. It was fascinating to see all the ways hemp could be used. It’s more versatile than cotton! 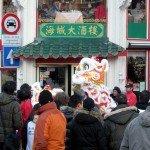 The Chinese New Year parade was hosted by a huge Chinese restaurant in the area. They had dragons and loud drums, and they marched through the streets. When they ended at the restaurant, they gathered in a circle and played the drums for a long time. Then they eventually set off the firecrackers. This happened several times while we were there, but I never got used to how loud the firecrackers were. The sound reverberates off the buildings. It’s unsettling, but maybe I’ve just seen too many gangster movies. 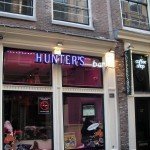 In the Red Light District we found a bar and coffeeshop called Hunter’s. And since we know a particularly awesome Hunter from Baton Rouge, we figured the place had a good chance of being cool. We were right. Other than the bathroom being super tiny (but clean at least!), the bar was a cool place. 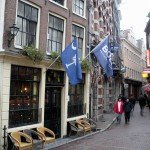 We saw several odd things while walking around the city, including a South Carolina flag hanging from a hotel and this nifty fry guy statue hanging out in a store front. 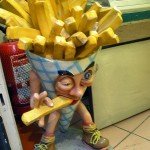 The fry guy is representing Amsterdam by illustrating the cone of fries they love to eat. The fries in Amsterdam are ridiculously good. They’re a must if you ever go. The only downfall is they eat fries with mayonnaise. Ick. I passed on the mayo myself.

Speaking of fries, we ate at the McDonalds at Schipol Airport while waiting for our flight. They don’t really have breakfast like we do, so at 8:00 am we were eating the following: Rachel – the worst croissant I’ve ever had and some of Roger’s fries; Roger – Quarterpounder (what happened to the metric system?); Adam – a “Big and Tasty” which was apparently a burger with gouda cheese. Hrm. They also served “McKrokets” which I thought was hysterical. 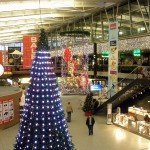 On the up side, Schipol is one of the most beautiful and efficient airports I’ve ever traveled through. It was decorated really nicely for the holidays. This picture is from the lounge we waited in, and it’s only a hint of how the rest of the airport looked.

After our last trip, Roger dreamed about Amsterdam nearly every night. And they were frustrating dreams where he was with a bunch of friends, but they don’t realize they’re in Amsterdam until the last day. So I asked him if he is still having dreams about Amsterdam, and he said he is but they have more closure. He now always knows he’s in Amsterdam so the dream is much more satisfying.

So does this make Amsterdam a dreamy place? Oh yeah, I went there. I made that corny joke. And now I’m leaving you with it. To ponder it. All day. Now, who wants to go to Amsterdam? I’ve heard it’s a cool place.

One thought on “Amsterdam Part 2: It’s fun to be a tourist”