I’m writing the story of William’s birth for his baby book, and I thought I’d share it here too. 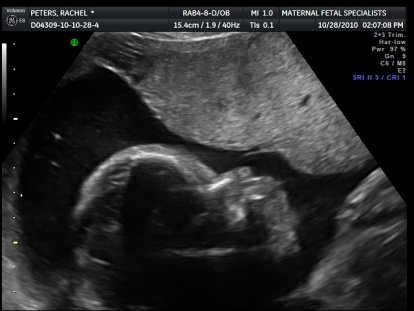 For the last few months of pregnancy, Roger and I had been seeing the doctor twice a week. When the doctor explained that I’d have to see them twice a week for several months, I immediately objected, “But I have a job!” To which the doctor replied, “You’re having a BABY.” Touche.

So why the twice a week dance? The doctors saw some troublesome factors on an early ultrasound, which led to ultrasounds every other week. It was not as awesome as it sounds (yay! seeing my baby all the time!), because they managed to find a new “soft factor” or “potential issue” or “it’s probably nothing but I’m gonna scare you to death anyway” quirk every time we went. For months Roger and I agonized over the possibility that William may have Down Syndrome and a skeletal problem similar to dwarfism.

I never wanted to bring it up at church for the prayer list or talk at great length with those outside my most inner circle, because I was embarrassed. I kept thinking that some how I had caused the problem, and I felt selfish because I didn’t want to deal with Down Syndrome. I hated myself for even having thoughts like that, and I hated that my excitement about a new baby was tempered by my fear. I think deep down I was afraid I couldn’t love my child if he had special needs, and that thought hurt me the most.

Then it got worse. The doctor suggested at one appointment that I may need to deliver that weekend, about 10 weeks early, to have a healthy baby. Roger and I took the news like adults, but I later broke down over lunch at Chic-Fil-A (in a booth over a chicken sandwich – oh brother). It was too much. First, I worried I couldn’t handle William’s needs, and now I was worried he wouldn’t live at all. This is why God sent me Roger. He reminded me it was OK (and normal!) to have those feelings and that I wasn’t alone. He knew William would be OK and that I would indeed love our child no matter what. He was always sure of that.

Fast forward to 39 weeks pregnant, over our final meal the night before heading to the hospital, and I still worried I wouldn’t love my baby. I know me. I’m fickle. I get all excited about a new project and after a few months I’m over it. What if William was born and I was suddenly over it? What if we didn’t bond? What if I didn’t cry at seeing him? What if I didn’t have the mom gene (not to be confused with mom jeans, of which I hope to never have)?

I soon learned how absurd those worries were.

Meanwhile, despite the drama at the doctor’s office and inside my own head, I handled pregnancy like a champ. I’d read about all the scary obnoxious things that can happen while you’re pregnant and continuously breathed a sigh of relief that I had very few of them. Fatigue set in around the start of the 2nd trimester, turning me from a Couch to 5K-er to a couch potato nearly overnight.

Morning sickness? More like ALL-DAY NAUSEA. But it only lasted through the first trimester, and I was never actually sick – just always feeling like I might be sick at any moment. This caused me to eat less, which unfortunately caused me to lose a little weight early on. Wheat Thins became my best friends (they settle any stomach), and salad was put on notice. Did you know that lettuce has a smell? IT…IS…DISGUSTING. Ahem.

Watermelon was soon put on notice too. Trying to be healthy and feed William nutritious snacks in the womb, I brought home a container of chopped watermelon. As soon as I opened it, my stomach declared war on my intestines. I promptly closed said container, trashed it, and alerted Roger that watermelon was not allowed within 50 feet of me. I eventually figured out the problem – I had super smell. It was like my pregnancy super power. Unfortunately, some foods (salad and watermelon) don’t smell so great when you have a bionic sniffer.

My last pregger-related symptom was cravings. I learned that it’s a myth that women crave weird foods like ice cream with pickles. Most women crave good foods, and ice cream is the most common craving. Well, shoot, I crave ice cream all the time any way, so I didn’t count that as a pregnancy nuance. In my third trimester I craved kid food – spaghetti Os and chocolate Pop Tarts specifically. One of my coworkers even offered to use her Costco membership to buy Pop Tarts in bulk for me. Since William arrived, I’ve not craved either. I see a lot of spaghetti Os and Pop Tarts in mine and Roger’s future, because that was all William.

Remember those pounds I lost in the first trimester? Kid food took care of that. I gained 30 pounds by the end of it. William was only 6 pounds, 5 ounces of that. Another 4 pounds of it was “other stuff I lost during delivery.” So that leaves me to work off 20 pounds. I blame the Pop Tarts.

Thank goodness my aunt bought me a jogging stroller!