I’m writing William’s birth story for his baby book, and I thought I’d share it here too. This is the final part. Hope you like it! 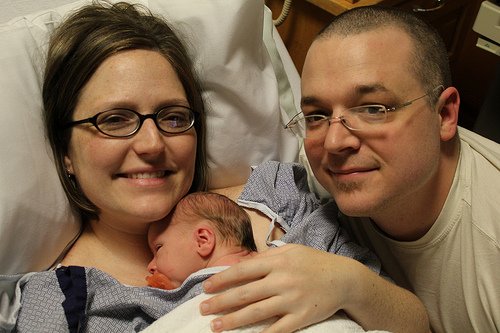 So there I was strapped to an operating table with my arms laid wide, a curtain across my chest, and a nurse at my head. I’m sure the nurse’s job was to make sure I didn’t pass out or die, but to me the most important thing she did was talk. She talked to me the whole time. I have no memory of what we talked about. I just knew as long as I talked I wouldn’t think about what was happening on the other side of the curtain. Normally in situations when my nerves are likely to overpower my sense of reason, I just hold my breath. (I didn’t say it was the smartest tactic.) But a C-section takes about 20 minutes. I needed a new plan, and talking to a complete stranger seemed just the ticket.

Roger says I seemed so calm through the whole thing, but I was holding on to my last shred of sanity. I knew if I let myself get scared even a little, I’d lose it. I’m not brave enough to power through something like that. So like a Southern lady sippin’ a mint julip on the veranda, I chit chatted my way through the ordeal. It worked.

Half way through the surgery, the doctor told Roger, “You gotta see this. It’s the most perfect head I’ve ever seen. You have to look.” Now let me explain something. On my way into the operating room, while Roger was elsewhere dressing up in scrubs, I told the doctors and nurses that Roger and I had no desire to watch the surgery, cut the cord, bury it under a tree, or eat the placenta. We’re not one-with-nature people. We “camp” in cabins with running water and a big screen to watch the football game. We don’t do “gory details.” Let’s not forget that I could barely handle watching other women go through labor.

But when a doctor who delivers hundreds of babies a year tells you he’s seeing the most perfect head he’s ever seen, you man up and look over the curtain. I’ll let Roger tell you the rest:

I had told the doctor I wasn’t up for watching the surgery/birth – I have a weak stomach, and I am quite aware of it. When he said “Hey dad, you have to see this,” I felt the need to listen, and I am very glad I did. I don’t know what I expected to see when I looked around to the other side of the divider – probably some blood, entrails, and a writhing bloody baby reminiscent of the diner scene in Aliens – but instead what I saw was something totally different. There was no blood that I noticed, only something that seems totally odd now, but was incredibly beautiful at the time. Down in my wife’s lower abdomen area was a perfectly shaped baby’s head sticking up seemingly out of her belly button. The doctor was slightly holding his head as he showed him off to me. Little William was only out up to the neck, the doctors and nurses had been cleaning out his nose and mouth before continuing, and were pausing to look him over before continuing. His head was perfectly shaped since he hadn’t had to pass through the birth canal, and his face was the most tiny and beautiful human face I’ve ever seen – perhaps ever will see. It was the first time I got to see his face. To see his first moments outside of the womb was amazing, and a sight I’ll never forget. I know I couldn’t have handled the surgery process itself, but I am very thankful the doctor encouraged me to see a once in a life time event, even if just for a few incredibly powerful and emotional seconds.

Finally William was starting his life on our side of my belly. While the nurses cleaned William up, Roger took cell phone pictures of him so I could see him too. I kept asking Roger if he looked OK. Did he look like he had Downs? And I realized I was scared – but no longer for me and Roger. I was scared for William. I wanted him to have a good life. In the presence of my newborn son, my focus finally shifted from me to him. And he was perfect. All the worrying was for nothing.

Then the nurses held him to me so I could see him and touch him. I’d waited so long to touch him. To see him. To hear him. And there he was – my perfect angel. I was ready right then to take him home forever. And that’s how Roger and I became parents.

No story is complete without pictures and a soundtrack, so here are ours. The song is Switchfoot’s “Your Love Is a Song.” It’s not a typical newborn baby song, but I think it reflects the emotions we had during this time. There were very bright highs and a few dark lows, but in the end we received more than we could have ever hoped for or imagined.

2 thoughts on “William’s Birth Story, Part 4: And Then We Became Parents”